Heads up:  we moved again and 603brown.com is open for business.

Winston or Beasley, who you got?

Nice little matchup shaping up Saturday night in South Carolina.  Say what you want about the NCAA but they do a decent job presenting their stats.  I decided to check Clemson and FSU out and it turns they’re pretty even.  (Stats are fun when you’re not ruled by them.)

Good work Cheddars:  after last week’s 54% performance and 60% hits on essays, we as a group are demonstrably imbued with, at the minimum, the casino prowess of Fredo after his time with Moe Green.  Still room for improvement though.  Just stay away from cocktail waitresses two-at-a-time and Johnny Ola.

That 54% win rate was enhanced by one of the worst beats in recent memory, enough said on that.  So fate smiled on the Cheddars (You went 35-16 for OSU.), why not?  It was well-earned after that rocky start.

We had a suggestion from Matt Borcas for the historical all-play this week.  The Broncos-Jags game is the largest opening point spread in NFL history.  The prior biggest was Bucs at Steelers in 1976.  That was Tampa’s inaugural year, 0-14, was the 13th game, and -no- the Bucs did not cover; final score 42-0 Steelers.

Congrats to Architect Art Vandelay on his Lobsterfest.  Nice to see the ballsy “-39.5” pick rewarded although, it was Oregon.  And obviously he benefitted from one of the baddest beats in recent memory but, well, that’s the casino business.

Wouldn’t be doing my job if I didn’t mention that one among us has been perfect with his weekly essay and not coincidentally he is enjoying great success in the standings.  One would do well to read this not-named player’s takes.

A minor setback last week, going 2-3 (although MTSU was a push if you bet it).  The Wake Forest pick was eerie… there sure did not look to be any reason to like Wake in that game but someone knew something.

Year-to-date Skanky is 15-6-1 ATS so take heed when ClevTA throws out this week’s Skankies.  Here they are:

Nothing in NFL this week.

END_OF_DOCUMENT_TOKEN_TO_BE_REPLACED

The emergence of Joe Haden this year has been pretty awesome.

In our friendly Cheddar Bay Pickstravaganza, we (or at least I) tend to tie ourselves up in knots with research to validate the pick of the week.  In thinking about tonight’s Bills at Browns game, it occurred to me that there’s no team I have more research on than the Browns.  So if I’m thinking the Browns a good bet to beat the Bills by more than four points, I gotta trust my eyes.  It’s unlikely that I’ll be as expert in the BallSt +5.5 @UVA matchup.  I can’t worry that a lot of other guys in this group have the same pick tonight.

So let’s take this on.  Here’s why I like the Browns tonight.

1.  Still an unknown team (nationally).
Jordan Cameron and Josh Gordon might have some cachet in fantasy circles.  But Craig Robertson and Buster Skrine and Mitchell Schwartz are unknowns.  Do you think Phil Taylor or Alex Mack or Jabaal Sheard are known quantities outside of NEO?  No way.  To the rest of the country, the Browns are Joe Thomas and Joe Haden.  Maybe there’s some respect for the FAs Bryant and Kruger but not so much for the talent on the team coming into the season.  As a result, the Browns are good value.  For now. 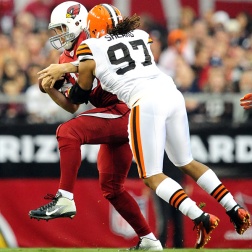 Mike Mayock is going to act like he’s known Jabaal Sheard all along but in reality, he just learned his name in this morning’s staff meeting.

But while we’re on the subject of Joe Haden…

2.  Joe Haden has moved to elite.
It’s one thing to look at some stats and say shit like ‘Oh wow, AJ Green only had 51 yards on seven catches so Haden must be really good.’  And while that’s true, what I’m seeing is more.  I’m seeing him daring QB just to try to throw his way.  Hell, I’m seeing him daring teams to RUN his way… his tackling has been intimidating this year.  But what I’m REALLY seeing is him inspiring his mates in the secondary.  They’re ALL playing strong; they’re all bringing Haden swag to their games.  The weakest part of the Browns roster is playing great and to my eye, it’s due to Haden’s play and his leadership.

3.  Competent QB play is, in fact, good-to-very-good QB play.
I well remember when Drew Bledsoe was knocked out of the game in 2001 and Tom Brady took his place.  Bledsoe had the gun and the pedigree but was prone to staring down receivers and jamming throws were they shouldn’t go.  Bad turnovers.  Did not inspire confidence in teammates and so not a great leader.  Enter Brady and he didn’t do anything spectacularly well.  Just ran through his progressions quickly and pretty much always found the open receiver.  Got rid of the quickly and accurately.  Poised in the pocket.  There weren’t any Manning-esque line-audible shenanigans then.  Brady was simply a competent practitioner of quarterbacking.   That’s what I’m seeing in Hoyer so far.  Nothing flashy but poised and competent.  Competent QB-ing is vastly underrated in my opinion. END_OF_DOCUMENT_TOKEN_TO_BE_REPLACED

Here is your happy Week Six Cheddar open thread.  In addition to being way too happy with the Bucks, Browns, and Indians from last weekend, we’re happy because we/Cheddar hit at 52% overall and a very good 61% one essaypicks.

Raises questions with no good answers..

Clearly the  Brian Hoyer* effect reaches further than Berea.  Could the improved Cheddaring be related to the eerie likeness between Hoyer and our own Cheddar Bay founder?

Maybe this has more to do with my own possible baldism.  But they look like twins to me.

Other business, congrats and welcome back to ClevelandThatILove (aka CLTIL) on her Lobsterfest.  I had been meaning to remove the jinx I put on her in the August ‘welcome’ post:

Now I don’t have to.

On the other of the spectrum, sadly I had to fire mom.  It turns put those poor AFA performances my folks saw were versus USU and Wyoming.  (!!!)  Like Dr. Evil, this organization does not tolerate failure so she was on first flight out Sunday AM.  (Awww… just kidding and of course I have access to a schedule which can be used to check data and such as.)

.
I wish to acknowledge the requests to move on from the local team all-plays but lookit:  OSU at NU is the best game this weekend.  You won’t see Ohio State again until the Michigan game.  Like Bluto, your Cheddar Bay Sergeant-at-Arms is just doing his duty.

Your Delta Tau Chi name is Pinto.
Why Pinto?
WHY NOT!

THIS WEEKS LINES ARE LINKED HERE.
THIS WEEK’S ALL PLAY IS OHIO STATE -7 AT NORTHWESTERN.
IPAD/MOBILEDEVICE USERS:  THE STANDINGS ARE LINKED HERE.
AND REMEMBER TO DOUBLE CHECK MY ENTRY OF YOUR PICKS ON THIS SPREADSHEET.