Good work Cheddars:  after last week’s 54% performance and 60% hits on essays, we as a group are demonstrably imbued with, at the minimum, the casino prowess of Fredo after his time with Moe Green.  Still room for improvement though.  Just stay away from cocktail waitresses two-at-a-time and Johnny Ola. 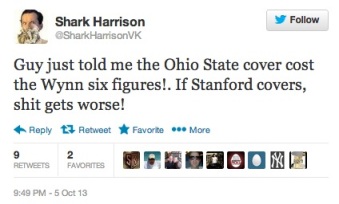 That 54% win rate was enhanced by one of the worst beats in recent memory, enough said on that.  So fate smiled on the Cheddars (You went 35-16 for OSU.), why not?  It was well-earned after that rocky start.

We had a suggestion from Matt Borcas for the historical all-play this week.  The Broncos-Jags game is the largest opening point spread in NFL history.  The prior biggest was Bucs at Steelers in 1976.  That was Tampa’s inaugural year, 0-14, was the 13th game, and -no- the Bucs did not cover; final score 42-0 Steelers.

Congrats to Architect Art Vandelay on his Lobsterfest.  Nice to see the ballsy “-39.5” pick rewarded although, it was Oregon.  And obviously he benefitted from one of the baddest beats in recent memory but, well, that’s the casino business.

Wouldn’t be doing my job if I didn’t mention that one among us has been perfect with his weekly essay and not coincidentally he is enjoying great success in the standings.  One would do well to read this not-named player’s takes.

A minor setback last week, going 2-3 (although MTSU was a push if you bet it).  The Wake Forest pick was eerie… there sure did not look to be any reason to like Wake in that game but someone knew something.

Year-to-date Skanky is 15-6-1 ATS so take heed when ClevTA throws out this week’s Skankies.  Here they are:

Nothing in NFL this week. 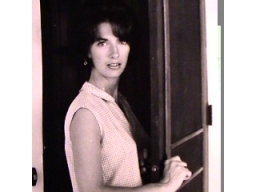 Mom was [understandably] [rightfully] horrified at my stealth recording of her which I published in this space a couple weeks ago.  She specifically wishes all to know that she does have a chin.  In support of this, here is a photo circa pre-Kanick.  Of course she’s been re-hired.

Just one more personal/mom anecdote.  Received a letter from her today and it turns out I got Woody Hayes’ autograph on a July 4th in C-bus way back when:

… Woody was at the 4th of July parade watching from Uncle Bob’s yard — corner of Northwest Blvd. and Brandon Rd.  Woody lived a couple streets up off Brandon.  The year was probably 1966.  Grandfather had you go over and ask for the autograph.  So, it really belongs to you.

And here it is. 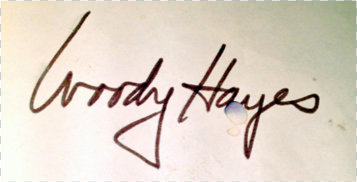 Woody was just watching a parade…

All righty, that’ll do with Kanick’s childhood for now; good picking all.