Home » Browns » How I would renovate Berea.

How I would renovate Berea.

Berea renovations and hoping for osmosis.

Brent Stehlik, Browns EVP-Revenue, tweeted out a picture last week showing how the some of the renovations of Berea are coming along.  The latest renovation was one of the first orders of business for the Banner regime after taking over.  As it was for the Mangini era prior to that.  And by the Lerners in 1999.  All this for a facility built just over 20 years ago. 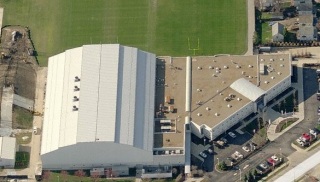 The building, which originally opened in August 1991, was renovated in the spring of 1999, while further renovations and expansion commenced during the 2009 offseason.  The most recent improvements include an expanded locker room, a lobby restoration that pays tribute to Browns’ Hall of Famers and a complete renovation of the cafeteria, video room, and meeting rooms, including a new 2,300 sq. ft. auditorium featuring 120 theater seats.

It’s been hard for me to capture my reaction to the investments the latest regime has put forward in Berea.  I’m not against eating healthy, so what’s the harm in improving the cafeteria?  Maintenance of the physical plant is important for any business, so why not spruce things up?  It’s not my money, it doesn’t eat cap space, what’s the problem?

I part company with the goodness of all this when these improvements are presented to the Browns’ customers (us) in a guise of “look what we’re doing for you.”  The logic that it’s “for us” relies on a very broad set of guides for “implementing culture change.”  That is, comfortable environs make for happier employees make for successful organizations leads to winning football.  It’s stretch, for me.  If this is all “for us,” what’s next?  Pictures of Norv Turner’s new Escalade?  Quinton Groves’ new house?  They’re now happier and they’re Browns’ employees… should we the fans expect to be treated to some selfies in front of garages?

So…, I’m not quite on-board with the embrace of renovations as being meaningful accomplishments of the new leadership team.  But Joe Banner wants me to think this is progress:

If culture change is what’s being sought, what is the new culture exactly?  It looks like they’re missing the mark or haven’t defined one.  What’s the new “look and feel?”  From here, the message reads:  You athletes –and also you VPs of Fan Experience– are super special and sixty years ago the Browns were really good.  By dint of having signed a contract with the Browns, you are heir to the mantles of Otto Graham and Jim Brown.

In other words, the renovations seem to me a furtherance of the entitled athlete thing and not at all useful if “culture change” is the goal. 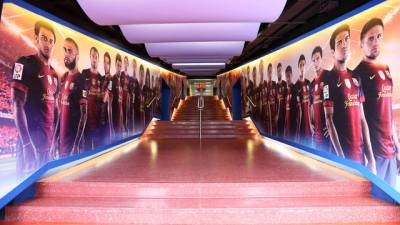 More than a club.

The message should be:  you have to earn it.

To the right is the tunnel from FC Barcelona’s lockers to their pitch.  It seems the Browns made have taken their design cues from here.

Barca has earned their tunnel.

Graham and Brown and Groza and Schafrath trained at Hiram College and held off-season jobs to make ends meet.  If you want to keep faith with the memories of the 50s Browns, the weight room should look like Mickey’s gym from Rocky.  Not for nothing but the Steelers will be in Latrobe this year for their training camp as they have done since 1967.

This is the wall treatment renovation earned by the Browns since 1999.

You don’t remodel your way into a winning tradition.  You earn that.  To miss that idea, to [apparently] think you can put up an Otto Graham poster and claim that legacy through looking at a picture … it not only misses the point, but drives home the wrong one.

Here’s what I would do for all the walls in Berea:  cinder block.  Cinder block wall in the hallways, offices, lockers.  And as the team accomplishes something renovations follow. A fair question becomes:  how do you link to tradition and still change the culture?  It got me thinking of one of the (if not the) pre-eminent golf clubs in the country.  Where Francis Ouimet won the US Open as an amateur in 1912.  A site that has hosted 12 major championships and a Ryder Cup.  TCC in Brookline; you can’t find a golf club with more tradition.

See right for how they have seen fit to capture and present their tradition.  Fairly modest, no?  Yet the message is not lost on anyone.

Just pointing out that there is only one to create a championship culture and tradition:  by being a champion.